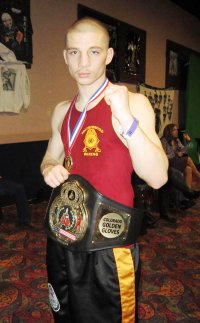 Over the past couple of months, I have been going back and forth of whether or not to go pro or not. With a lot of that thinking, I recently made the decision to continue my boxing career as a professional boxer. Something that I have always wanted to do since I first laced up the gloves. I can honestly in my heart say that the position I am in today would not exist with out the help of Denver Police Brother Hood. Not only were they a strong force inside of the ring, but they also had a huge significance in my schooling and in my life. From scholarships, fundraisers, and donations of school supplies such as a computer, this program uplifted me to a higher level in my career.

Along with the education, there have been cases where the program has helped me out financially in going to national tournaments and helping me focus all my time into boxing.

One thing I love about The Brotherhood boxing program, is that it is like a brotherhood feel. Though the sport of boxing is an individual sport, everything inside of that gym is off of a team as a one. From bag drills to exercise drills, we are all there by one another's side, pushing and helping each other to become better. The coaching staff is great, from the basics of boxing to the national level of amateur boxing. With out there help, I would not have excelled in my boxing skills as a national level fighter.

Sargent Joseph Rodarte is the backbone of this program. Every fundraiser and event he is there. Giving out scholarships for the individuals who are in college. Him being a police officer, it was very difficult for him to be at the practices and the fights but he did his best even if he showed up for ten minutes, he was there in good intentions to show support. I will make sure he will be there for a pro fight. Thanks Rodarte. You are appreciated by me an the whole Brotherhood Boxing team members.

C.C. Edwards, the director of the program, went over extremes to be there for every fighter in that gym. From getting every fighter's paperwork in to making sure all of our team members received the fair opportunity to compete at the tournaments. Another significant thing that I am very thankful of, is his priorities to put Brotherhood first. All the fundraisers and getting us in the cinco de Mayo parade was amazing. I want to give a personal thanks to C.C Edwards for not only doing the following actions from above, but helping me get to national tournaments, specifically the Last Chance Tournament that was located in Cincinnati, Ohio. I learned a lot in this tournament and fought my heart out.

Me and assistant coach Roman Sanchez became real close over the time of me at the Brotherhood. Along with his technician knowledge about the sport, he was the coach to push me to the next level with no mercy and was the hard one on me. With his busy work schedule he did his best to make it to the gym to help out and show his support and commitment to the team. Not only is he a great coach, he also became a significant friend figure as well. He was the type of person you could go head and talk to and he would actually be understanding about any issue or concern that was going on in and out the gym.Not to long ago he called just to see how I was doing and asked about my boxing. Thank you Roman for everything and I will let you know of every pro fight!

Head Coach Stephen Blea, played a huge role for me this past year in and outside the ring. He helped me get out of bad habits I developed over the years and getting my style more to a national level fighter. Throwing in bunches, scoring points, and moving was the main focus through out the training camp. He also stressed on my "left hook" to the fullest. Something I finally got down 100 percent right before one of my fights in the Last Chance tournament. Another thing about this man that put him out from any other coach is his heart and his care for his fighters.If he felt that one of hid fighters was not ready for any type of competition, he would not let you compete for you're safety. If you asked for a dollar, he would give you his last twenty in his pocket. I remember one day after a hard day at the gym I was walking out and he put two twenties in my hand and told me to get my car fixed so I can get to the gym, school, and work. Many incidents like this happened over this time that shows what type of man he is. So , thank you coach for everything that you have done for me and I am positive that everything I have learned from you , in and out the ring, will help me develop as a fighter and as a man in the years to come.

I just want to give thanks to the Denver Police Brotherhood for all of their support and encouragement they have provided me for the past 8 months. I have nothing but love for you guys and will give back! Without this team , I would have not been the places I have been, and not have received the recognition that I have National wise. I will be turning pro and one day you can say you was part of a World Champion's boxing Career! That is because it is the truth. God bless and thank you for everything!